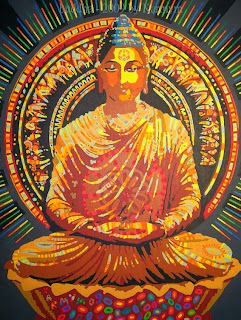 Buddha Shakyamuni was accomplished at becoming enlightened. I don’t know how many times he became enlightened in this world sphere, probably hundreds of times. However, the Bodhisattva who is doing it for the first time will achieve a specific form of enlightenment but the practice of becoming enlightened should happens over and over again in order to become truly accomplished enough to benefit  many living beings. The energetic resonance of the awakening experience is powerfully valuable for myriad beings. One can even become enlightened, really enlightened, more than once in a single lifetime. Of course, that takes a bit more skill. It also requires unusual circumstances to be able to forget enough to become enlightened again. Anyway, don’t worry about that. Student: On purpose though? Rinpoche: On purpose. Yes. ~ Domo Geshe Rinpoche ~~~ „Der Buddha Shakyamuni war vollendet darin, die Erleuchtung zu erlangen. Ich weiß nicht, wie viele Male er in diesem weltlichen Bereich erleuch
Post a Comment
Read more
More posts