Is the Female Body and Mind Strong Enough to Become Enlightened? 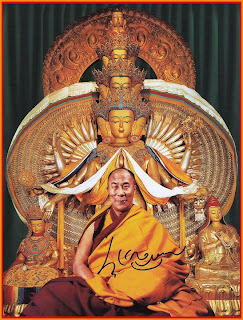 Sadly, it is thought by most Tibetans (if not all), that the mental and physiological capacity of those in a female body is not as strong or dedicated to enlightenment as those who have a male body. That worldly activities, such as family, will always come before the immense tantric yogic effort needed to reach the enlightened state. That testosterone brings courage. That women are too frail to endure the hardships of years of practice. That female birth is of a lower order and only a superior male birth can produce the potential for enlightenment. That a woman's role is to support a male practitioners needs and care so that he has long life and comfort to practice. sigh...... The exceptions are so rare that books are written about their lives. The recent announcements that HH the Dalai Lama might consider female rebirth is surprising, considering Buddhist cultural attitudes. ~Domo Geshe Rinpoche ~~~ "Leider glauben die meisten (wenn nicht sogar alle) Tibeter, d
Post a Comment
Read more 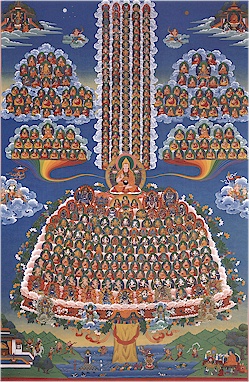 The Geluk merit field is one of the most important meditation formations. It is a little bit like this; I read about the blue angels, jet planes that fly in close formation. Like that, this assembly visualization is vrrrrooooomm…. great ones, powerful beings in close formation, all there, right there. Who knows, maybe they are like blue angels. Certainly, they would be similar to the blue angel pilots, who are highly skillful beings, and top of their field. However, the merit field beings can do things that pilots cannot. The tremendous individual effort that beings such as Geshe Chekawa, or the others depicted in the merit field gave, benefitted living beings, but in addition, they remained in an internal method, in a cooperative formation. If we want to call this an enlightened society, it would comprise different levels such as the assembly of gurus, presenting teachings for different times and places such as Geshe Chekawa. The seven-point mind training is a
Post a Comment
Read more

On the Road with Domo Geshe - short video 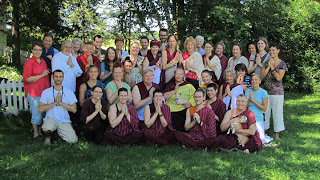 Make your reservations now for summer retreat. 1, 2 or all three weeks of Buddhist study and meditation in the countryside of Wisconsin.   Join us for the White Conch Annual Summer retreat July 9th to August 1 2011 in C entral Wisconsin, Choose one two or all three weeks this year to deepen your practice with teachings, private meditation, Chi gong, yoga. Private and semi-private rooms, dormitory, campers and tenting at Hermitage and Norbu House. Great vegetarian meals http://www.white-conch.org/ Plan Now! http://www.white-conch.org/Cal endar.html If you have gained accomplishment of Buddhist teachings or principles by deep reflection on the various points, it will feel spontaneous, so there is no need to recite the meditation sadhana slowly. If, for the benefit of beginners in a group meditation, you would like to slow down for their sake, that is fine. But if all those pres ... ent are already expected to have accomplished the additional meditations to gain proficien
Post a Comment
Read more 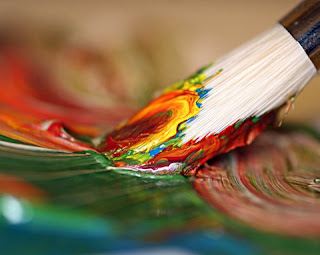 Extracting blood from a turnip, shaving the hair of an apple and awakening of someone who uses anger: all are impossible. ~Domo Geshe Rinpoche ~~~ Starry sky tonight and crickets calling... I am told... They want me to see it for myself but I am satisfied knowing that there is a starry sky and crickets calling... I can feel it   The enhancement of intelligence is a kind of sparking of ordinary quick wisdom, like a four-cylinder car that has become an eight cylinder speed machine. With all pistons firing, we can remember, which will create connections to other concepts. However, even with intelligence, if our minds are like a leaky sieve, while learning or e xperiencing something new, it is difficult to appreciate it fully. If we do not actively try to hold it, we cannot retain it, just like a leaky pot. Then, each time we sit for meditation, attend a teaching, or try to read a Buddhist text, it is as though the slate has become erased. If we view dharma wisdom in a di
Post a Comment
Read more

Our Realizations are Tested by Life, Karma and Inner Methods 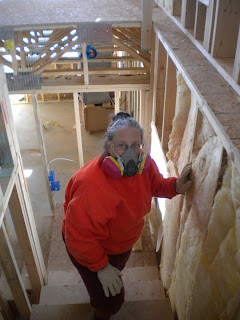