Showing posts from December 4, 2016
Show all

Karma, Transformation and other Buddhist musings.... 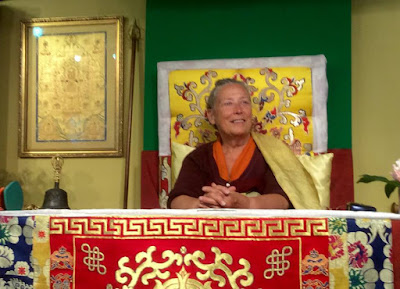 
Another aspect of karma is that it is definite. For example: a farmer purchases corn for seed and plants it carefully. He waters it or it rains, the sun shines down, and that corn begins to sprout. Then, for whatever reason, that farmer goes to his field and commands that crop, “You will not grow up as corn. You will grow up as wheat.” Will his wish be enough to prevent that corn from coming up as corn?
Student: Maybe.
R: We’ve got a believer in magical thinking.
S: Anything is possible.
R: Anything is possible with sufficient time, energy and magical ability (laughs). However, in any normal situation the farmer’s wish would not be enough to prevent that from coming up as anything except corn.
S: From a quantum mechanical viewpoint, there’s a probability that sometimes this particle could be here, or it could…
2 comments
Read more
More posts